Since time immemorial, Koreans have been celebrated the world over for their remarkable bow-making expertise as well as their legendary bowmanship.

The Korean traditional bow (Gakgung), part of Korean military history. Learn about the usage and modern applications in archery. 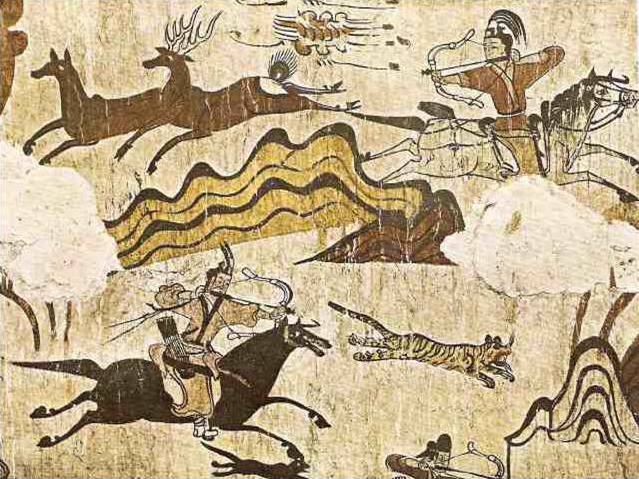 <A painting of a hunting scene on the wall of Muyongchong tomb depicts the vigorous horsemanship of the Goguryeo people.>

Suryeopdo, a depiction of unparalleled bow and horsemanship

The bow was an essential tool of everyday life in ancient Korea that eventually gave way to more technologically advanced weaponry in the modern era. The bow was the symbol of the king; arrows symbolized sunlight. A good marksman was believed to be someone who could control the sun—the king. Jumong, the founder of the ancient Korean kingdom of Goguryeo (37 B.C.-668 A.D.), literally means "one who is skilled with the bow." Indeed, the Goguryeo people were famous for their outstanding use of the bow and arrow while on horseback, a skill which is noted in many historical anecdotes. In the Muyongchong tomb from the Goguryeo period discovered in former Manchurian territory, there is an ancient yet well-preserved painting that shows the strength and vigor of the Goguryeo people. Titled Suryeopdo (painting of hunting), the right side features a cart pulled by a white ox behind a large tree, while the left depicts hunting warriors. Five men on horseback with feathered hats pull on their bows to hunt tigers and deer, with mountains shown in the distance. The painting illustrates the dynamic energy of the hunters racing through mountains and streams as well as the riders performing the highly difficult move of releasing the reins entirely to twist their torsos around to shoot arrows.

There are largely three types of bows in the world: dansungung (simple bow), ganghwagung (backed bow), and the hapseonggung (composite bow). The dansungung is a simple bow made from wooden or bamboo sticks that was mostly used in the southeastern areas of North America, Oceania and sub-Saharan Africa. During the Middle Ages, the dansungung was used in regions of Europe north of the Alps. The ganghwagung has a body bound with string to increase its resistance, examples of which have been excavated from Maglemose remains from the Mesolithic era of Northern Europe. Bows fortified through wrapping a piece of wood around the body's middle have also been found in the Aru Islands of Indonesia, among the African pygmies, and in Northeast Asia and Alaska. The hapseonggung is a further-developed version of the ganghwagung. The hapseonggung is believed to have been invented by nomadic tribes of central Asia and has been discovered along the Mediterranean coast and in regions of central Asia, China and western North America. It is made by pasting together two sheets of wood with glue or by pasting animal tendons onto the back of the bow's body. The hapseonggung is the most developed of the three types and was the weapon of choice of horse riders due to its strength despite its relatively small size. 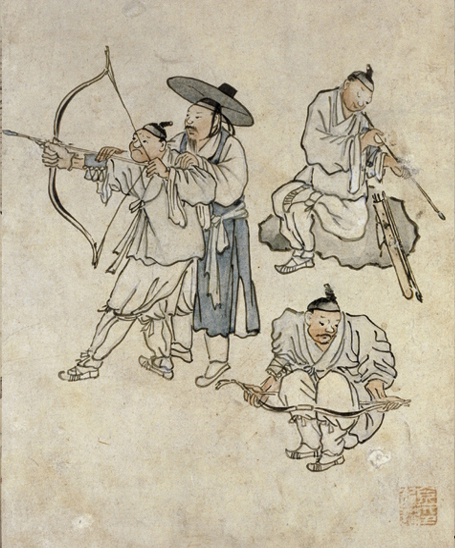 <A painting by Kim Hong Do shows a seonbi (an intellectual from the Joseon Dynasty) using a bow and arrow during the 18th century Joseon period.>

Traditional Korean bows can be classified into the following categories: gakgung, gogung, jeongryanggung, yegung, mokgung, cheolgung, and cheoltaegung. The gakgung was primarily used during the Joseon Dynasty as the basic weapon of the military and was made out of water buffalo horns. Making a single gakgung took approximately four months and required materials such as water buffalo horns, ox tendons, bamboo, mulberry wood, glue made from a croaker's air bladder, and bark from a cherry tree. Gakgung made in this manner were small in size but were able to shoot arrows across long distances. Compared to the British longbow, which can shoot 200 meters, the gakgung can shoot an arrow as far as 500 meters with an effective range of 350 meters. 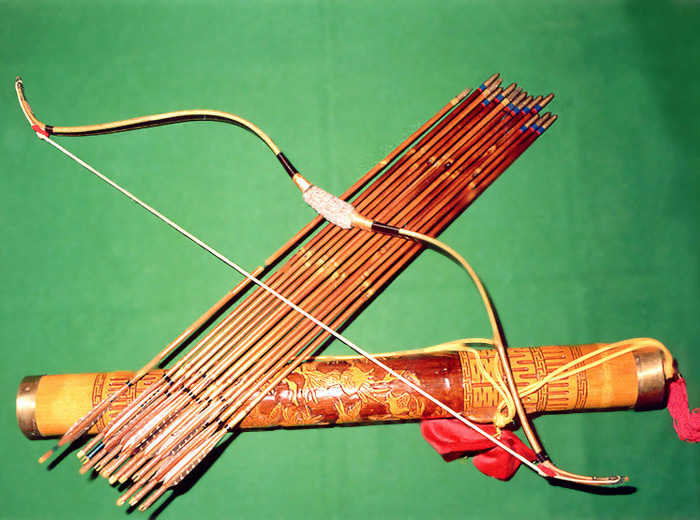 <Korean bows are characterized by their use of ox horns and tendons.> 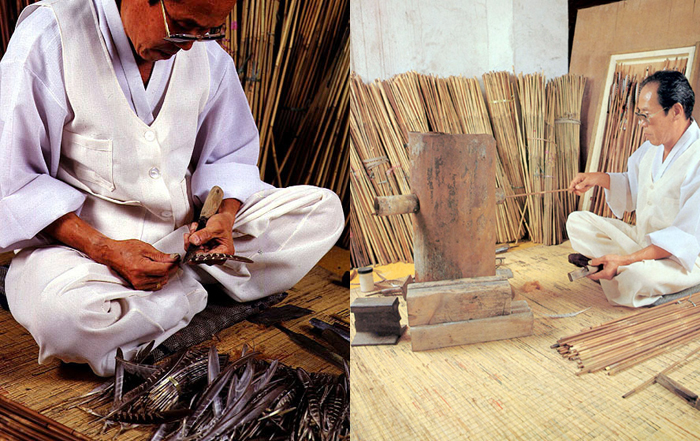 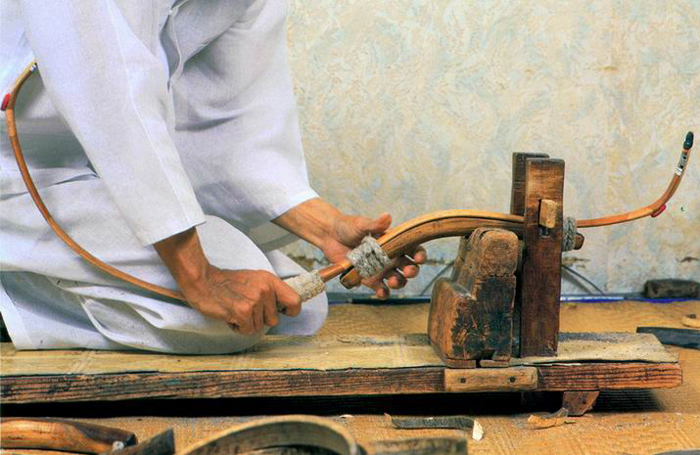 <The Korean people are known for their exceptional bow-making techniques. A master bow artisan makes a bow and arrow in the traditional method.>

Korean archers rewrite the history of the bow

Together with the British and the Japanese, Koreans used bows as long as they possibly could before they were forced to give way to more advanced technology. However, the Korean bow and arrow that almost disappeared within the stormy tides of the modern era have been reborn in the sport of archery. At the 30th World Archery Championship held in West Berlin in July 1979, then high school student Kim Jin Ho achieved a world record, winning five out of six events. Following this initial victory, Korea continued to assert itself on the global stage as an archery powerhouse. Korean archers have won gold medals in nearly every international archery competition, including the 1984 Los Angeles Olympics, the Seoul World Archery Championship in October 1985, the 1988 Seoul Olympics, the 1992 Barcelona Olympics, and the 1996 Atlanta Olympics. By sweeping various world records as well, Korean archers are rewriting the history of world archery.

In the past, the Korean people were called "Eastern people who are skilled with the bow." This ancient tradition continues into the present day. It is no coincidence that Korea displays some of the best bowmanship in the world.

The Korean traditional bow (Gakgung), part of Korean military history. Learn about the usage and modern applications in archery.