These magnificent paintings are artistic masterpieces that exude an elegant and artistic sophistication within the sculpturesque beauty of the Buddha figures.

Korean Buddhist paintings, the best of Buddhist art in Korea including paintings in temples, on walls, pillars and ceilings. Buddhism's famous masterpieces. 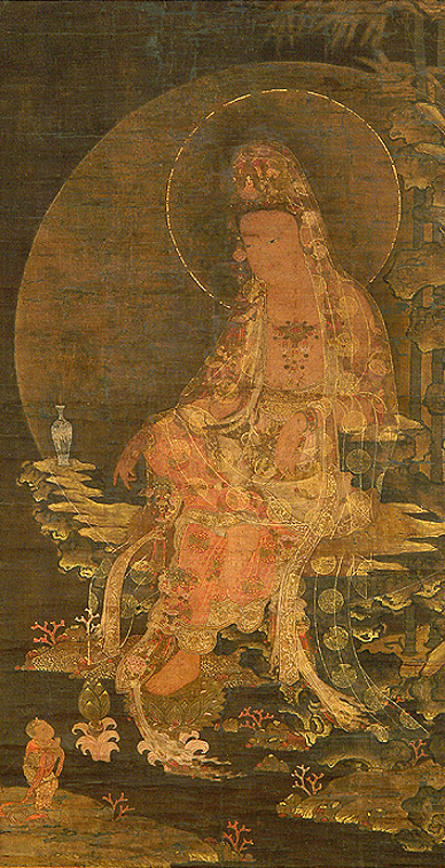 <One of the best Buddhist paintings from the Goryeo Dynasty (918-1392): Water-moon Avalokitesvara.> 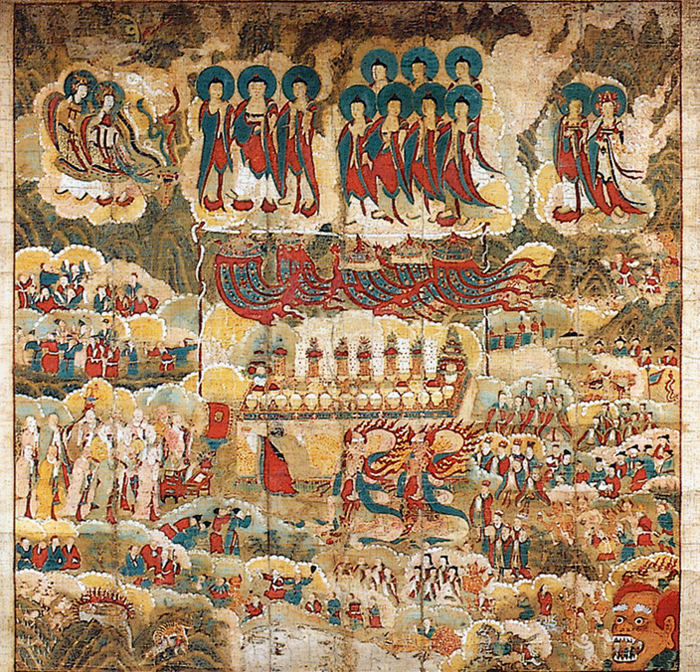 <This Nectar Ritual Painting from the Joseon Dynasty depicts a panoramic view of a ritual in which Buddha ushers all beings who suffer in this world and in hell in the next world to nirvana by giving them nectar called gamno, representing Buddha's teaching of enlightenment.>

Just like the cathedrals and temples of Europe, Korean Buddhist temples are filled with many paintings. Not only are paintings found on the walls, ceilings and pillars of the buildings, but there are also taenghwa (paintings with a border design to be hung on walls), gyunghwa (drawings illustrated in books of Buddhist scripture or made into woodblocks), and folding screen paintings. Though Buddhist paintings comprise various formats and depict different subjects, each work possesses the highest degree of artistry. 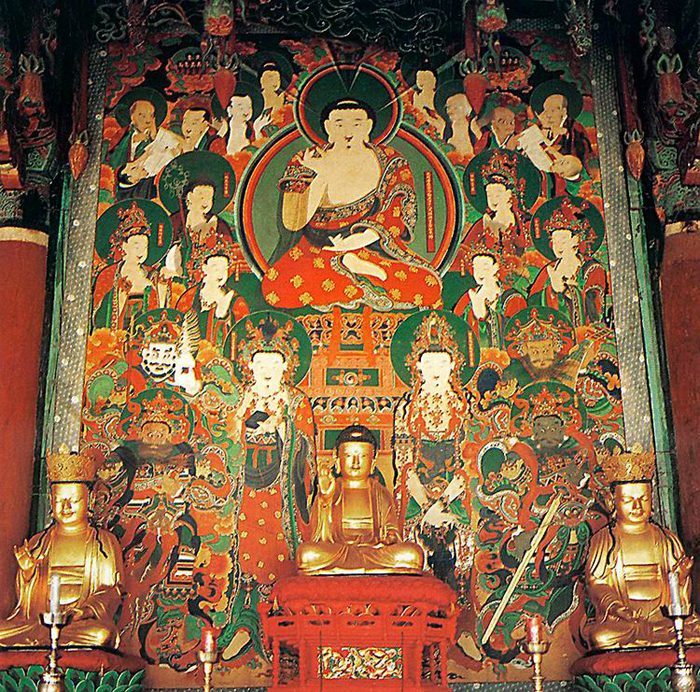 <The Three Amitabha Buddhas is a wall painting located behind the seated Buddha at the Hall of Paradise of Cheonunsa Temple in Gurye.>

An aesthetic representation of the Buddhist Avatamsaka world

Contrary to their Tibetan, Chinese and Japanese counterparts, the Buddha figures that appear in Korean Buddhist paintings have a very human appearance. Breaking free from any particular schematic or symbolic structure, Korea's Buddhist paintings are created in a realistic yet highly artistic manner. Through the use of red, green and blue as base colors with clay yellow and white interspersed in between, the paintings take on a familiar yet mystical appearance. Moreover the Buddha, who is always positioned at the center, is depicted as a very large figure with many bodhisattvas and lesser gods symmetrically positioned to his right and left, representing a stable world order. 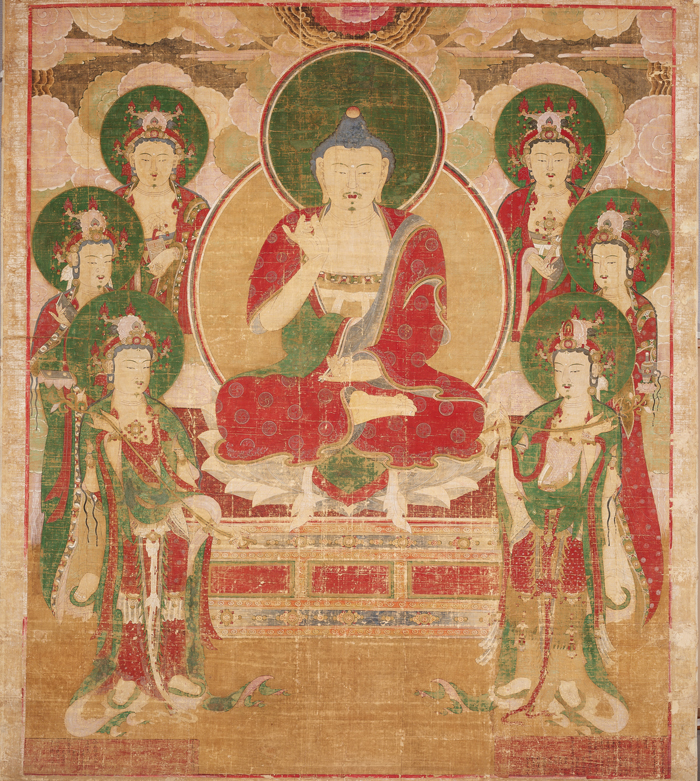 The paintings' subjects commonly portray Buddha giving a sermon on the Lotus Sutra on Youngchuksan Mountain (Sermon at Youngsan) or the life of Sakyamuni in eight scenes. Other subjects include the Vairocana Buddha, Amita Buddha, Medicine Buddha, bodhisattvas, kings of the underworld, the seven guardian gods, and the enlightened Buddha. The golden age of Korean Buddhist painting was the Goryeo Dynasty during the 13th century. However, due to loss in war or fires, few paintings from this period have survived while those that still exist are in the possession of other countries, including Japan. Thus, most of the Buddhist paintings in Korea today are dated post-17th century. Goryeo Buddhist paintings are rarely exhibited to the public. 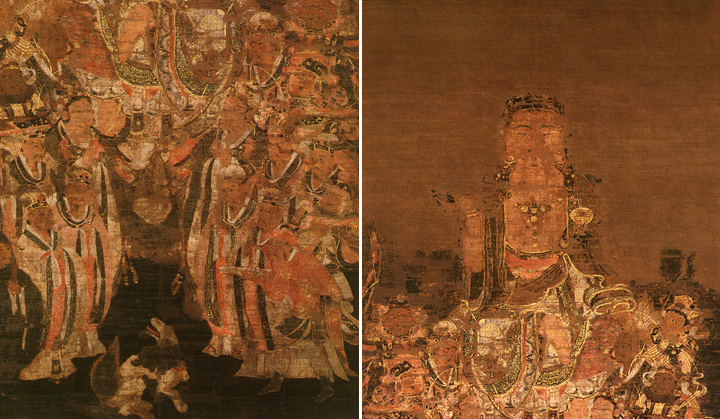 <The Bodhisattva of Great Aspiration from the Goryeo Dynasty leads humans who are suffering the pain of hell to nirvana.> 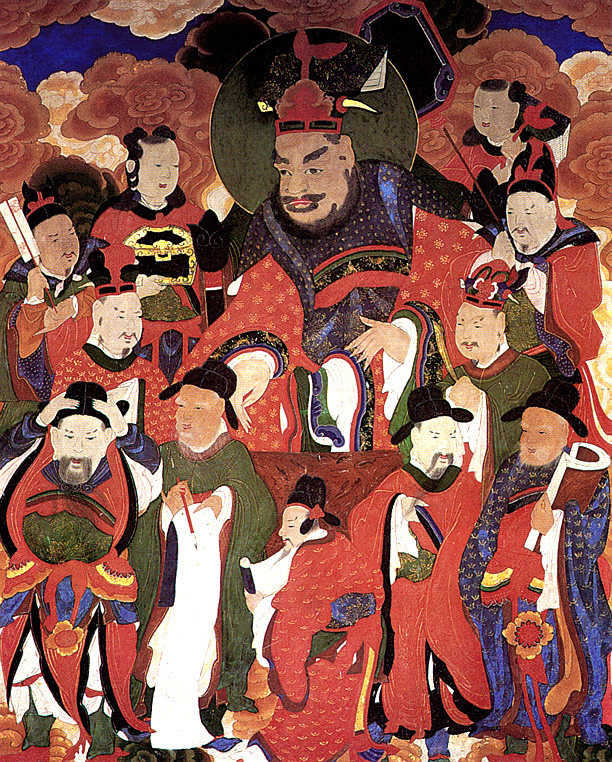 <A silk taenghwa of the Joseon Dynasty that depicts bodhisattvas and generals guarding Buddha.>

The Water-moon Avalokitesvara, which was introduced to Western audiences for the first time in 2003 at an exhibition in San Francisco, received a great deal of attention for its coloration, elegance and spectacular sculptural expression. The New York Times quotes, "It's the equivalent to Mona Lisa." Its exhibition marked a turning point at which the artistic sophistication of Korean Buddhist paintings was revealed to the world. 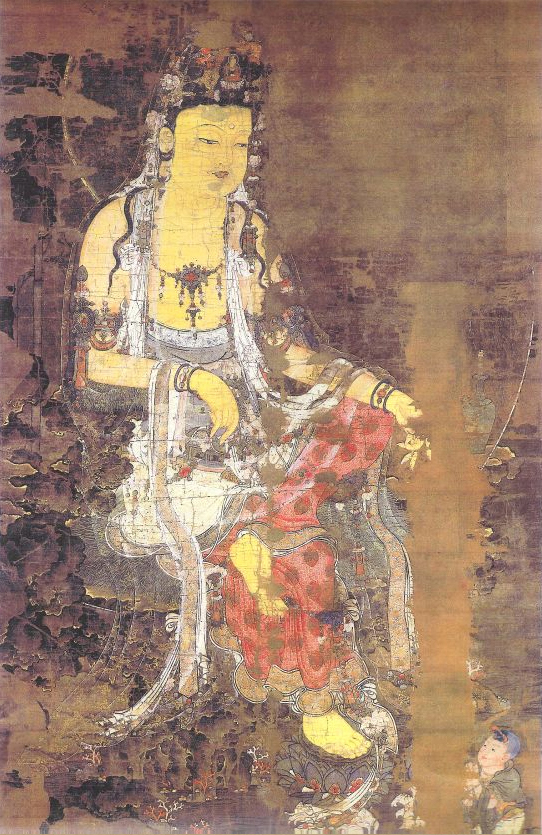 <Water-moon Avalokitesvara, created in 1310 during the Goryeo Dynasty, was exhibited in San Francisco in 2003.>

Records show that the original was probably larger than the painting we have today. However, at 4.3 meters long and 2.54 meters wide, it is the largest of the surviving Goryeo-era Buddhist paintings. Highly regarded for its degree of artistic completion, Water-moon Avalokitesvara is said to have been created in 1310 as part of a massive collaboration of the best royal artists in Goryeo mobilized by King Chungryeol and the queen of King Chungseon. For unknown reasons, it was later sent to Japan where it resides today at the Kagami-jinja Shrine of Shiga Prefecture. As it is a major cultural heritage of Japan and because of its extensive damage, the painting is heavily guarded with no access given to the general public. 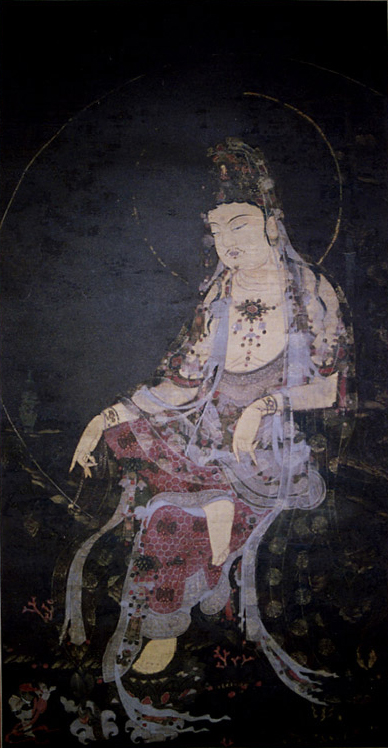 Water-moon Avalokitesvara dramatically depicts the mental struggles of humans who come to realize that the moon reflected in the water is not the actual moon in the sky. It shows worshippers who, upon reaching the end of their mental struggle, have arrived at nirvana under the protection of Kwan yin Bodhisattva, a reincarnation of the Amitabha Buddha.

Korean Buddhist paintings, the best of Buddhist art in Korea including paintings in temples, on walls, pillars and ceilings. Buddhism's famous masterpieces.