Ondol, an incredibly efficient home heating system that is good for human health, is a uniquely Korean innovation.

Ondol (or Gudeul in Korean) - the traditional Korean home heating system is a unique invention of ancient Korea.

The start of Korea's turbulent twentieth century saw Koreans both voluntarily and forcibly cutting almost all of their ties with traditional culture in an enthusiastic embrace of Western customs. Traditional clothing was abandoned in favor of Western suits, while tile-roofed houses were set aside in order to build apartment buildings and Western-style homes. However, some aspects of traditional culture have remained strong through the years, one of the most vital being ondol. Though Korea is full of modern high-rise apartments, the rooms in these apartment buildings are always built with modern-style ondol floors. Also, even though most Koreans live in Western-style homes, they do not follow the custom of some Western countries of wearing shoes indoors. 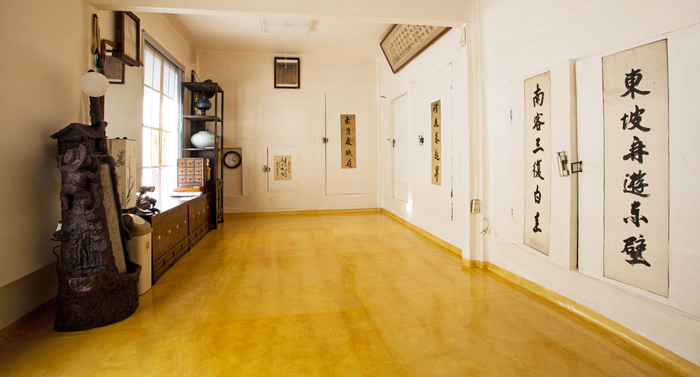 <An ondol-heated room in a traditional Korean house (hanok).>

Why do Koreans insist on ondol? The reason is simple: everyone loves it. "Ondol" is the Chinese character for the Korean term "gudeul," which literally means "baked stones." Thus, ondol refers to a system of heating in which stones are "baked" to heat the floor and with them the room—an extraordinary system entirely unique to Korea that does not exist elsewhere in the world.

The history of ondol in Korea spans thousands of years, as evidenced from excavated prehistoric artifacts from the Iron Age (circa 2nd century) and Goguryeo wall paintings. The earliest ondol heated only parts of a room. The system of heating an entire room first emerged in the mid-13th century of the Goryeo Dynasty and became prevalent throughout the Korean peninsula in the early Joseon Dynasty (late 15th to early 16th century). Ondol''s long period of development has resulted in highly scientific systems and complex structures.

The most important aspect of the ondol structure is the gorae, the area through which the smoke from the heated stones passes (see diagram below). Attached above the gorae are flat, wide stones (gudeul), on top of which is a layer of red mud clay to prevent smoke from seeping out. When a fire is lit in the fireplace, the fire and hot smoke pass through the gorae under the rooms, raising the temperature of the floor and then passing through the chimney at the end. The principle of ondol simultaneously utilizes the conduction, radiation and convection of heat. Heat is conducted through the stones attached to the floor, and then radiates throughout the entire floor. In other words, a warm temperature is maintained through the convection of air.

The only other places in the world to use similar heating principles are parts of Northeast China and Mongolia. Northeast China uses an early ondol system of heating only certain areas of a bedroom, while in Mongolia an ondol heating system is used for the floor of the ger, the traditional dwelling (also called a yurt). The system of installing gudeul across a room's entire floor is found only in Korea. Its advantages are heat efficiency, the economical use of fuel and facilities, and durability. The biggest advantage of all is that it is good for health. 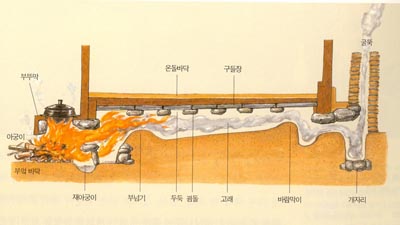 <A diagram of the structure and principles of ondol.>

Why is heating the floor beneficial? Koreans commonly believe that keeping one's hands and feet warm and head cool is good for health. It is this principle that ondol makes possible. Furthermore, it is a highly economical heating system. Only one-fifth of the heat produced by a Western fireplace is actually radiated into the room. By comparison, ondol stores the heat produced in the gudeul, making it possible for heat to be radiated over a long period of time, even for several days, if the gudeul have been installed properly. Whereas the smoke of a fireplace enters the room and thickens the air, ondol has no such problem; because ondol not only heats the floor but can also be used in cooking, it is a highly effective "two birds with one stone" system.

Recently, architects who have noted the efficacy and advantages of ondol are trying out various ways to use ondol in modern houses. With the introduction of Korean ondol in China, Japan and even Europe, it is beginning to receive recognition as a new system of home heating.

<Due to its excellent scientific properties, ondol is still used in modern architecture. An ondol room in a modern apartment building is not heated with a traditional kitchen fire but by installing pipes on the floor through which water heated by the boiler flows, heating up the room.>

Ondol (or Gudeul in Korean) - the traditional Korean home heating system is a unique invention of ancient Korea.