Korean hanok bring the natural world inside, allowing its human residents to coexist peacefully with the simplicity, beauty and spirit of nature.

Both a huge, 99-room tile-roofed house and a small, three-room thatch or oak bark-roofed mud hut are counted as hanok (traditional Korean house). This is because while there may be differences in material, size or structure, all homes that are equipped with ondol (an underfloor heating system) and maru (a wide wooden floor area) are considered hanok. Ondol is an underfloor heating system that originated in homes in northern regions with a continental climate, while the maru is a structure for cooling that originated in homes in southern regions with an oceanic climate. 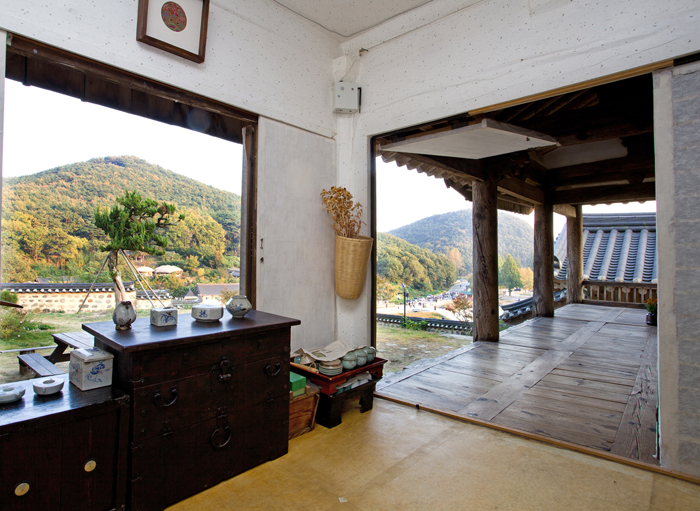 <An ondol room and a maru floor, two unique features of the hanok, coexisting together.>

During the hot summer, Koreans mostly stay on the maru, while they spend time in rooms warmed by ondol in the winter. The wood that forms the maru and the fire that makes ondol possible are incompatible. Because wood is vulnerable to fire, no architect in the world places these two elements together. However, due to the Korean peninsula's circulating pattern of cold and dry air in winter and hot and humid air in summer, the Korean people were forced to develop a method in which both heating and cooling could coexist. Therefore, hanok have been built since antiquity with both maru and ondol—adaptable to both heat and cold. This coexistence makes hanok an extremely science-based architecture unprecedented anywhere in the world.

Earth, trees and hanji: Building a house from nature

The traditional architecture of most countries makes use of materials like wood, earth and stone that are easily found in the surrounding natural environment. The hanok was no exception. Wood was used for its pillars and maru, stone for the gudeul (heating device of ondol), and clay for the floors and walls. Of these materials, the hanok used a particularly large quantity of clay, applying it not only to the walls but also to the roof. The clay is what makes hanok cool in the summer and warm in the winter with its innate heating and cooling properties. 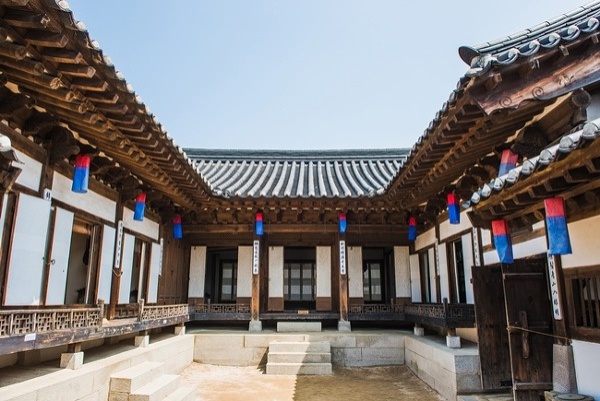 <Hanok with a stone base, wood pillars and maru, hanji door, and clay roof.>

Another unique feature of hanok is its use of hanji—traditional Korean paper that is made from the bark of the mulberry tree—on every flat surface inside the home, including walls, doors, the ceiling and even the floor. Hanji was pasted on doors due to its excellent insulating capacity and its transparency—it not only kept the room warm but also let in sunlight. Hanji does not have the closed structure of glass; rather, it has air holes that make ventilation of the entire home possible without having to always open the doors. Hanji also adjusts humidity levels by absorbing excess moisture in the air and evaporating it when the air is dry. It even traps floating dust particles, acting as an air purifier. With all of these features, the hanok is not only eco-friendly but brings nature itself directly into the home in the forms of light, air and even sound.

<Doors of a hanok are made by pasting hanji onto beautifully crafted door frames.>

Koreans learned the value of life from their everyday interactions with nature. Indeed, even the direction in which a house was to be built was determined in harmony with the surrounding environment. This communion with nature resulted in simple homes without frills, yet not at all destitute. In this way, all the natural elements surrounding the house, including wind, grass, fields and the sky, were brought indoors. In other words, hanok was the realization of the desirable union between nature, the home, and human beings. It is this adherence to the natural elements that gives the hanok its simple, soft beauty coalesced with a dignity and harmony that is absolutely magnificent. 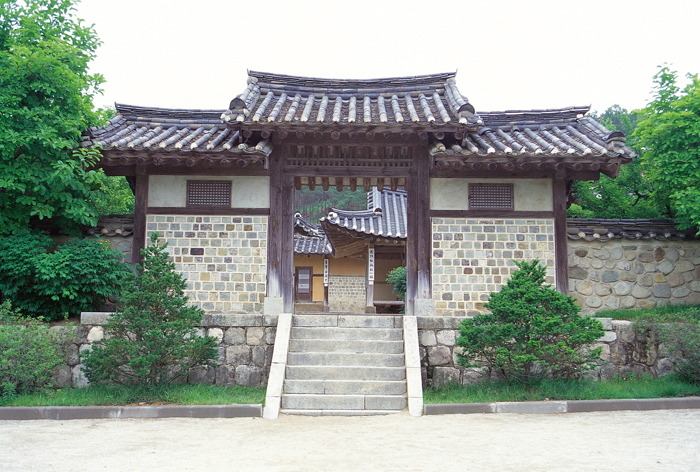 <The gate of hanok and anchae (main building) seen through the gate.>

The courtyard of a hanok was not filled with a garden; rather it was intentionally left empty. This is because the natural environment surrounding the home was considered its "garden" – all one needed to do was simply open the door. The courtyard was also left unfettered based on the idea that by leaving it empty, it would be able to hold all things. This is a markedly different concept from Western architecture as well as a departure even within the Eastern cultural spheres from the embellishment of Chinese spaces and the artificial beauty of Japanese architectural spaces. Amid the peacefulness and humility of the Korean hanok, there is a decided vitality and elegance. 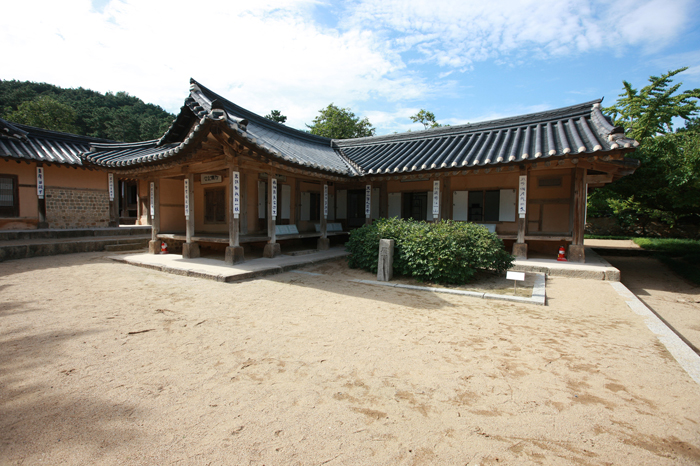 Hanok attempts no ostentatious displays. Its subtle beauty and depth can be found in its respect for nature and the virtues of the commonplace. Because of the hanok's soft and quiet features, its simplicity may feel forlorn and desolate at times. The hanok has a natural aesthetic that lacks any artificial touch. It is this sense of restraint supported by subdued colors that brings out the natural order of the surrounding environment. This is a structural beauty based on the organic standardization of the simple line, a simplicity that refuses artificiality and instead seeks out depths of meaning in silence. Within the hanok is an essence which attempts to follow and converge with the order of nature. 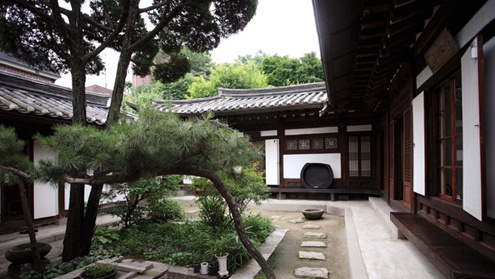 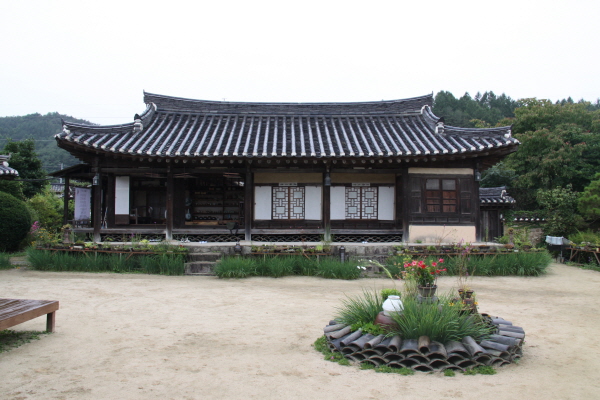 <The sarangchae is where guests were entertained.> 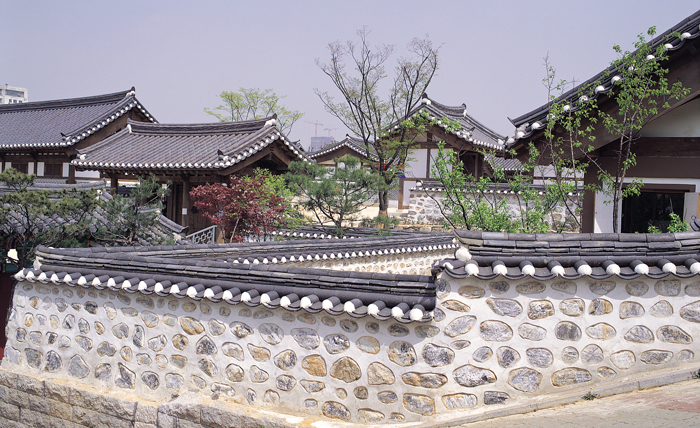 <The wall and eaves of a hanok in Namsan hanok village.> 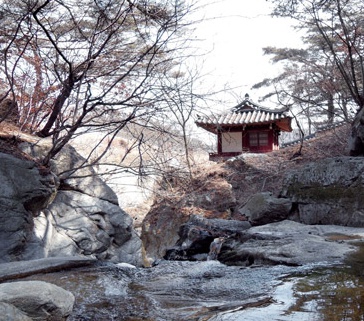 <A hanok pavilion located at a stream at Taebaeksan Mountain. It is the former residence of a seonbi (intellectuals of Joseon Dynasty) who retreated into the mountains, unable to bear the harsh circumstances of his country.> 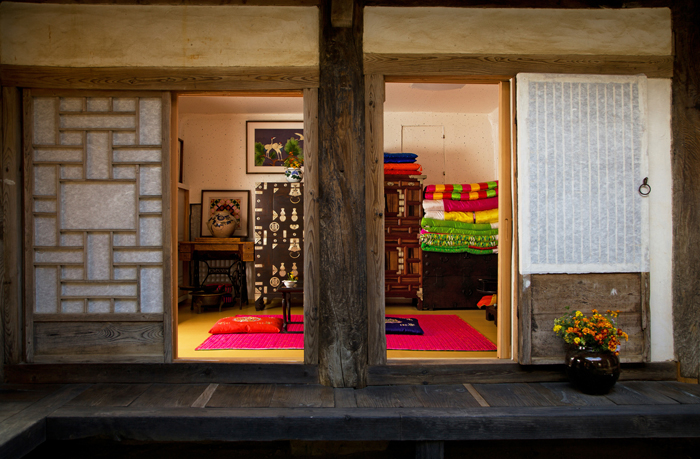 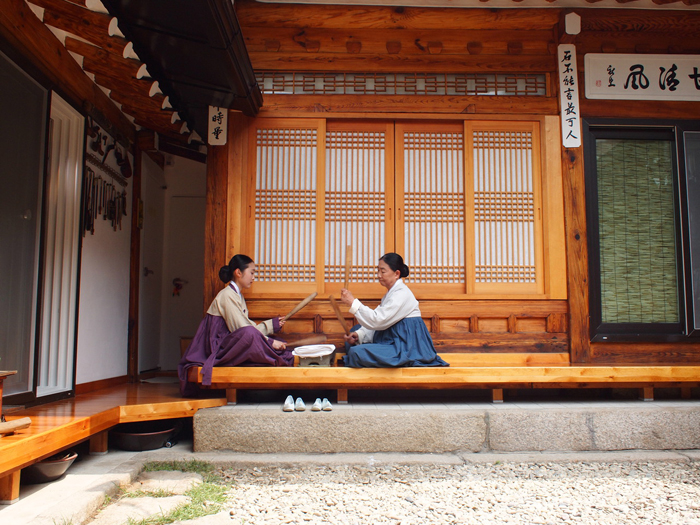 <Mother and daughter-in-law ironing the traditional way on toenmaru (narrow wooden floor running along the outside of rooms) of hanok.>

<Traditional Korean coming-of-age ceremony on the floor of hanok.>