A combination of both science and philosophy, Korean feng shui is essential for the prosperity and well-being of the Korean people. 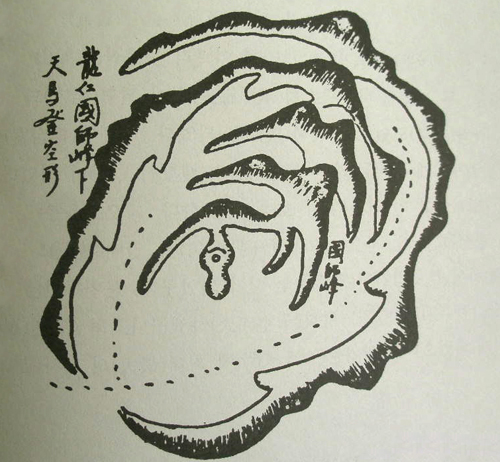 <A painting from Yusanrok, a book detailing auspicious sites throughout Korea.>

Feng shui, the geography of the East

Even in modern Korea, the first question that must be answered before a house is built is whether or not the site is auspicious (an auspicious site is called "myeongdang" in Korean). The same question is asked when choosing sites for parental graves, for which a feng shui expert (a person who possesses the gift of prophecy) is consulted before grave locations are marked out. The adherence to the concept of myeongdang is not linked to a particular religion, social class or level of education in Korea; rather, it is a long-held custom that has been passed down for thousands of years. Since antiquity, Koreans have believed that harmony between natural phenomena like rain, wind, and the changing seasons as well as between the geographical features of one's immediate surroundings like mountains, bodies of water, and land contributed to human health and happiness. The essence of this belief is that building one's home on a good myeongdang (also called "teoh"), living there for one's entire life and being buried on an equally good myeongdang will bring peace and prosperity to oneself and one's descendants. It is this belief, combined with the theory that the fate of human society is based on yin-yang and the five elements, which gave rise to various prophesies concerning the fate or fortunes/misfortunes of humankind. Such prophesies became systematized in Daoism, leading to the development of feng shui (called "pungsu jiri" in Korean), a unique Eastern spiritual ecological science. 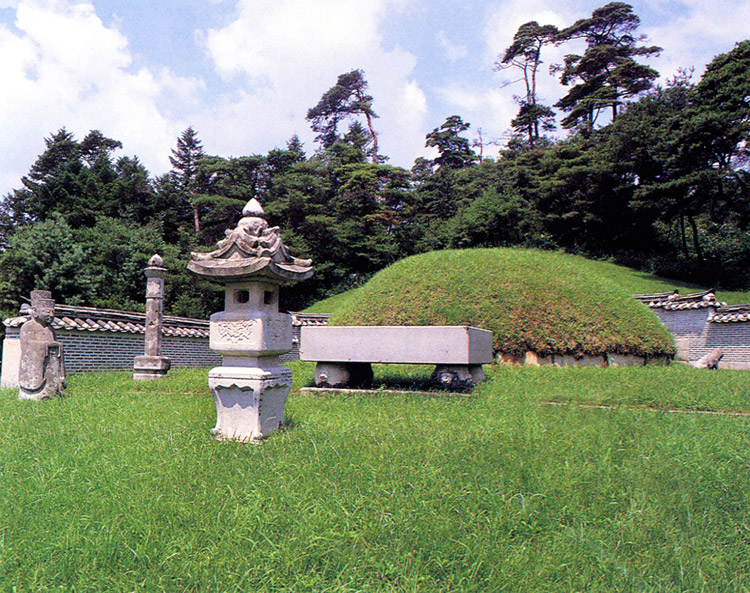 <The grave of royal concubine Park (1770-1822), a concubine of King Jeongjo (who reigned from 1776 to 1800), was moved from its original location to its current one based on the argument that its initial location was an undesirable myeongdang.>

Pungsu, the living energy of Earth made by wind and water

The Chinese characters for the word "pungsu (feng shui)" are literally translated as "wind" and "water." "Pung (wind, 風)" represents climate and Earth, while "su (water, 水)" refers to everything related to water. In essence, the basic principles of pungsu dictate that the life energy that permeates through the Earth in fixed routes brings human beings fortune or disaster depending on how it is encountered. The life energy, or ki (chi in Chinese), is said to move in certain paths, just as blood in the human body runs through fixed vessels. Therefore, a person with good ki enjoys fortune and prosperity throughout their life. But if a house is built in a place where various ki routes overlap, the family residing in that home will prosper for generations. If such a location becomes the site of a district or province, the entire country will prosper for years to come; and if it is used as a site for ancestral graves, that particular family will have many notable individuals born into it.

The belief that Earth is imbued with energy is based on the perception of Earth as a living being. Just as the human body has blood vessels that carry nutrients and oxygen to its various parts, it is believed that Earth has similar veins. 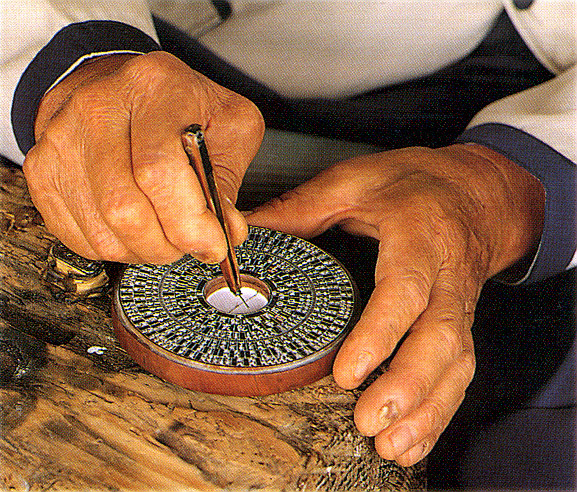 <The yundo, a type of compass, is an essential tool for feng shui experts to interpret the Earth's energy.> 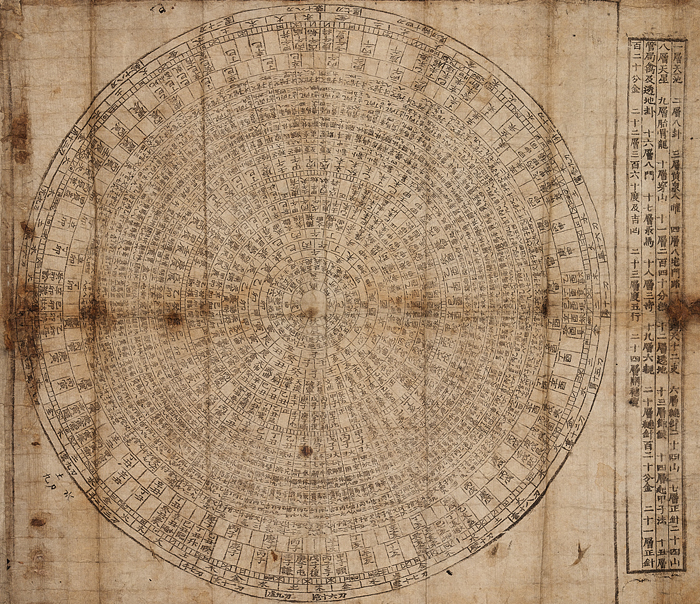 <24-tier yundo manual printed in 1848. It contains four cardinal directions, eight trigrams in I Ching that tell about fortunes, the 10 Heavenly Stems (Cheongan), the 12 Earthly Branches (Sibiji) symbolizing 12 warrior deities in Taoism who protect the Earth, and 24 solar terms. All these are systematically arranged on the dial in tiers according to the Yin-Yang and Five Elements theory. Feng shui practitioners use this tool to discern topographical features, the amount and flow of wind and water, and the ki concentrated underground in order to find an auspicious site that is harmonious with nature.>

Modern pungsu jiri: A new alternative to geography based on life and the environment

Today, pungsu is being understood and applied in new ways. The term "finding teoh," which refers to the search for a myeongdang, is similar to the modern term "designation of position." The conditions of "finding teoh" may vary greatly depending on the individual and the land itself. Natural conditions including topography, geological features, climate (wind, temperature), and the presence of water must be in harmony with social and economic conditions like transportation, markets, labor, land conditions, raw materials and electricity supply. For example, when planning a city, the location of the industrial, residential, and business areas, as well as the direction each faces and the locations of fire stations, hospitals, city hall, schools and parks are all exhaustively cross-checked for legitimacy and accuracy in accordance with pungsu principles. The principles of pungsu jiri are considered even today when determining sites for important state facilities. 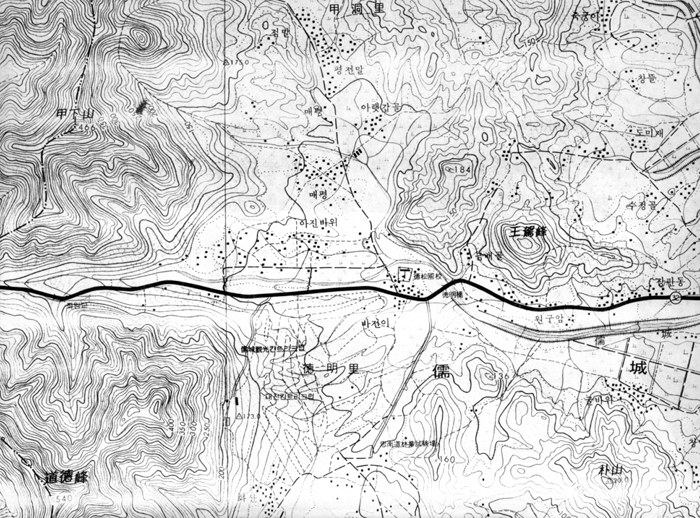 The concept of pungsu today takes in equal measure an ecological, science-based philosophical approach and a historio-geographical, experience-based approach. In short, it seeks "harmony or balance with nature" through realizing the ideal relationship between structure and the natural environment together in order for its human residents to have the highest quality of life. 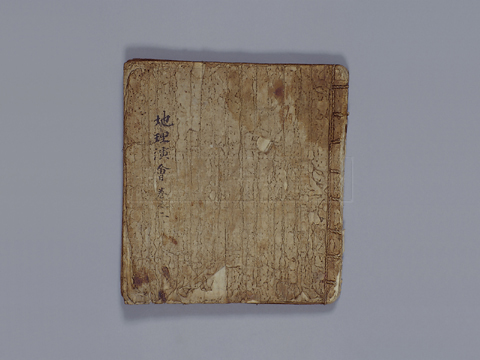 <Record of Jiri is a book published during the Joseon Dynasty that contains explanations of pungsu.>